Sumitomo Joins a Gold and Copper Mine in Peru

Michelin and Sumitomo Corporation to Create Second-Largest Wholesale Player in the U.S. and Mexico

Sumitomo Corporation Participates in General Pharmaceutical Business in the U.S.

Recognition of Excellence for Hirotec Mexico

Firstly, HTX received the GM Global Supplier of the Year Award, an award designed to reward high-quality and excellent service in the automotive production industry. This award marks a return to glory, as HTX had not received this award from GM for several years.

“This is the tenth time we have won the Supplier of the Year Award,” Asaka Okamoto, Executive Vice President of HTX, explained. “The last time being back in 2012. This honor is a clear reflection of HTX’s solid contribution in GM’s mutual effort to provide customers with the best products and services, as well as for QCD total performance.”  HTX received the award at GM’s 27th Annual Supplier of the Year celebration in May of this year.

Additionally, HTX received a Supplier Excellence Award from Daimler Trucks NA, an honor only awarded to 45 suppliers out of more than 1,000, with the official recognition ceremony held in October.

“This award is MOQ 2018, meaning Master Of Quality,” explained Okamoto. “That means that HTX was appraised as the provider of the highest quality products and services to their factories and customers. Only a limited number of suppliers in the world — 23 from Mexico, 20 from the U.S., one from Canada and one from Europe — were selected for the award from more than 1,000 suppliers. This is the first time we have received the award for Hirotec as well as Sumitomo Corporation Group, I believe.”

Finally, HTX received BMW’s Supplier Excellence Local Content Award for 2019, an award given to only three of 100 automotive suppliers to BMW this year.

“The local content information provided to BMW is what allows their company to be more competitive in global markets like the U.S., Canada and Europe,” explained Okamoto. “BMW is saving import duties due to a percentage of what’s known as ‘local content’ in production. BMW experienced an export duty reduction for all the BMW suppliers from reports of this local content, and our participation was noted and received recognition.”

A significant contributor in the SC Mexico automotive business value chain, Hirotec Mexico was incorporated in 1998 and has served automotive facilities in Mexico with quality products for more than twenty years. 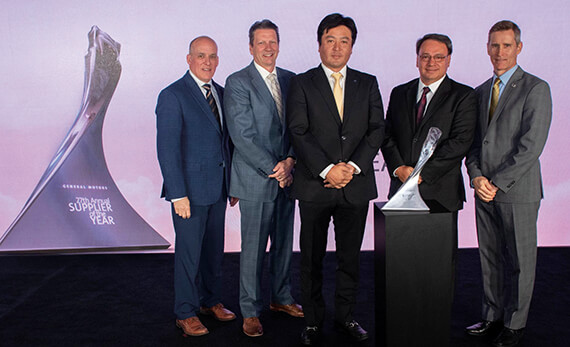