SCOA has more than 30 years of experience delivering and installing commuter rail cars in the United States. We can provide a variety of rail car designs to transportation authorities anywhere cost-effective solutions to today’s mass transit problems are needed. 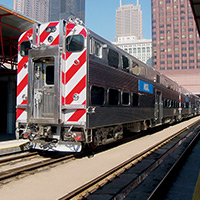 In 2012, SCOA and Nippon Sharyo, our partner and rail car manufacturer, celebrated their 30th anniversary of supplying commuter rail cars in the United States and in that time have supplied many cars for a multitude of projects.