Department is helping get Miami International Airport (MIA) passengers from the runway to the roadway faster than ever before. The MIA Mover, a 1.25-mile-long automated people mover (APM) system between MIA and the new Rental Car Center, opened to the public on September 9. This marks the second APM system at Miami International Airport completed by SCOA and Mitsubishi Heavy Industries America (MHIA), and the fourth APM system that this duo has ushered into use in the U.S. in the past four years. 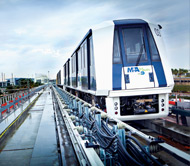 On September 8, SCOA personnel joined over 200 business and community leaders along with officials from Miami-Dade County, the Greater Miami Convention and Visitors Bureau, Parsons-Odebrecht Joint Venture, and MHI for an inaugural celebration and preview of the MIA Mover before its public opening on September 9.

“The success of this project is primarily an example of cooperation between multiple contractors with one common goal,” said Gino Antoniello, SCOA’s Vice President of Transportation Systems,“which is to provide a state of the art transit system on time and on budget, and this latest accomplishment continues to demonstrate Sumitomo’s capability, know-how and commitment to the marketplace.

” With a top speed of 40 miles per hour, the MIA Mover has the capacity to transport more than 3,000 passengers per hour directly between MIA and the Rental Car Center’s customer service lobby just east of Le Jeune Road. MIA passengers simply exit their concourse and take elevators to MIA’s third level moving walkway, which quickly connects them to the MIA Mover.

“The MIA Mover is yet another successful milestone for Miami–Dade County,MIA, POJV, and its partners,” said José Abreu,Director of the Miami-Dade Aviation Department. “The movement of people is what we are all about, and today we are even closer to the day when the traveling public can move seamlessly among all forms of ground transportation, mass transit and air travel.”

A secondary but important benefit of the system is the reduction in vehicle traffic at the terminals,which is expected to significantly reduce exhaust fumes near passenger entrances and walkways.

“To address airport space considerations and to relieve the congestion that thousands of cars per hour bring,”Antoniello added,“the APM system displaces a significant amount of airport traffic,making operations smoother and more secure.”