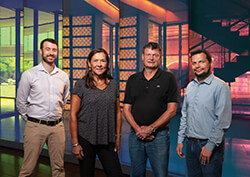 Providing an investment to scale a new photocatalytic reactor and build a pilot plant for hydrogen production, Sumitomo Corporation of Americas participated in Series A funding for Syzygy Plasmonics Inc., a new tech company in Houston, Texas.

Syzygy aims to revolutionize the industrial gas, chemical, and energy industries by drastically reducing the cost and carbon emissions in the production process for a wide range of major chemicals such as fuel, fertilizer, and plastic. Syzygy’s first go-to market is focused on hydrogen production for transportation.

Syzygy is advancing a new photocatalytic chemical reactor powered by light, as opposed to heat from burning fuel, leveraging an innovative photocatalytic platform technology based on two decades of research from Rice University professors Naomi Halas and Peter Nordlander. In reducing carbon emissions among common energy producers, this marks a significant step for Sumitomo, as Syzygy has the opportunity to disrupt the current energy landscape.

“We are excited to support the groundbreaking technology Syzygy is bringing to this space,” said Kazuki Yamaguchi, Senior Vice President, GM Energy Group, Sumitomo Corporation of Americas. “We believe hydrogen is and will continue to play an important role in the future energy market and we aim to facilitate on-site hydrogen production to deliver much more affordable hydrogen. Globally, Sumitomo Corporation is engaged in hydrogen business and it intends to continue investing in innovations like Syzygy’s.”

Hydrogen Generation Market size is forecast to cross USD 180 billion by 2024, according to a new research report by Global Market Insights, Inc.

“This support coming from Sumitomo is pivotal for Syzygy,” Said Trevor Best, CEO and Co-Founder of Syzygy. “Not only does it provide additional resources for our development, but it also helps Syzygy in that Sumitomo is a strong commercial partner who can help us to deploy these systems. Perhaps most importantly, it shows Sumitomo’s support for early stage technologies with the long term potential to help fight climate change.”

The technologies for creating plasmonics all rely on controlling the interaction between an electromagnetic field and the free electrons in a metal that account for the metal’s conductivity and optical properties. Recently plasmonic science applied to the field of photocatalysis has enabled breakthroughs like the one being commercialized by Syzygy Plasmonics.

SCOA has continued to diversify its energy portfolio outside of its typical oil and gas investments, particularly in renewable energy and this new addition proves to support the company’s entrance into non-hydrocarbon space as it aims to promote more environmentally sustainable energy.

Now You See Me, Now You Don’t?

Unrelated to Syzygy’s projects, plasmonics’ most “magical” possibility is in creating an “invisibility
cloak.” In 1897 –  long before Harry Potter’s version of the device – H. G. Wells published The Invisible Man, where a young scientist discovers how to make his own body’s refractive index equal to that of air, rendering him invisible. (A material’s refractive index is the ratio of the speed of light in a vacuum to the speed of light in the material.) Exciting a plasmonic structure with radiation that is close to the structure’s resonant frequency can make its refractive index equal to air, so it would neither bend nor reflect light. Laminated with a material that produces optical gain, the structures increase in intensity would offset the absorption losses. Making it invisible, at least to radiation in a selected range of frequencies.

A true invisibility cloak, however, must be able to hide anything within the structure and work for all visible light frequencies. Physicists say this may actually be possible, through plasmonics. In a 2006 study, scientists at the Imperial College London showed that a shell of metamaterials could, in theory, re-route the electromagnetic waves traveling through it, diverting them around a spherical region within and essentially rendering an object invisible.