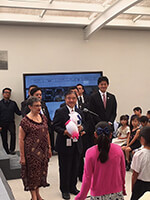 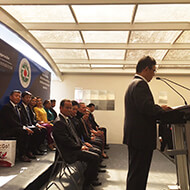 With the influx of Japanese-affiliated companies in Mexico and the increased number of expatriates in recent years, the demand for more Japanese-oriented educational opportunities has become apparent. In an effort to meet the unique needs of this growing population, Sumitomo Corporation (SC), SC Mexico and Mazda de Mexico Vehicle Operation (MMVO) combined resources to help provide a solution; the Instituto Educativo Japonés de Guanajuato, A.C., (aka Japanese Educational Institute of Guanajuato). This school was established this year in Irapuato City, Guanajuato, to fulfill the need for Japanese language education for Japanese children living overseas.

The new school was certified by both the Japanese Ministry of Education, Culture, Sports, Science and Technology Ministry as well as the General Education Law from Mexico Guanajuato State Department of Education. Part of the school’s mission is to promote educational and cultural exchange activities with Mexican educational institutions, societies and communities as well.

Serving students in grades one through nine with a staff of twelve teachers, the school began operations in April in the facilities of the Institute of Languages at the Technological Institute of Higher Studies of Irapuato (ITESI). 25 students attended the first semester of classes.

Chiharu Mizutani, President and CEO of MMVO, served as chairman of the school’s preparation committee, along with other MMVO executives. Serving as vice chairman of the preparation committee was Masahiko Morito of SC Mexico’s Automotive Business Unit and EVP of MMVO. Additionally, Takahiro Sakaue at the same unit and GM of Finance at MMVO headed the accounting and financial subcommittee. This committee was able to raise more than $2 million for the school from nearly 140 companies.

“Accompanied with the development of the automotive industry here in Guanajuato State,” Sakaue said, “the number of Japanese companies has increased more than 10 times in comparison to 5 years ago and so has the number of Japanese workers to more than 2,400. Therefore, it became urgent to establish a new full-time Japanese school in addition to the supplementary school.”

“We started the school establishment project in December 2017 and since then; we have accomplished the difficult tasks such as the acquisition of tax-benefit status, the selection of the land for the school and the collection of donations totaling over 240 million yen, or $2 million. However, it has been quite hard to prepare everything to open a school in one year and a half while running our main business.”

Mr. Morito said that he too was concerned as to whether the school could be ready by April of 2019.

“However,” he said, “when I saw the beautiful brand-new school buildings during the opening ceremony, it made me very satisfied. After the ceremony, I saw the students running and playing at the schoolyard, and dancing in the music room, and I really thought it was absolutely worthwhile to have worked so hard in spite of the difficulties. Also, this project is very meaningful as a social contribution activity for MMVO and SC, and here I would like to express my sincere gratefulness to SC/SCOA/SCMX for their generous donation.”

CAPTION: Opening ceremonies for the school were attended by SC and MMVO executives