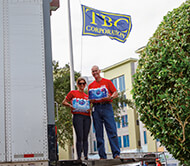 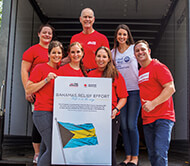 “Leave everything better” is not just one of TBC Corporation’s core values, but the underlying foundation on which the 63-year-old company is built. Looking to have a larger impact and make greater contributions to fellow associates, as well as their company, customers, franchisees, shareholders and communities, TBC continues to implement far-reaching Corporate Social Responsibility initiatives. When Hurricane Dorian wreaked havoc on the Bahamas and Bahamian people, TBC Corporation immediately initiated several actions to support the people of this area, with several TBC teams focused on extending aid and relief. These actions included:

“We did all of this because we are a team that is persistent and a team, who, as a united front, is committed to doing everything and anything we can to leave everything better in the communities we serve and beyond,” noted Erik R. Olsen, President & CEO of TBC Corporation.